Workout Week 13–My Legs Are Rebelling

Posted on 5 April 2021 by Side Quest Publications

I keep thinking that this is supposed to be my monthly update for April, and I think the problem is that this is my week 13 update. See, at each of the previous months, the monthly update used as its source whatever activity I had done in a week that is divisible by 4 (because of months having four weeks) plus one extra week to start the next month. Not that I’ve had all that many months to form a pattern from, but whatever. And if every month was actually a standard 28 days long (which would require 13 months and either a slightly shorter year or a few days that would still eventually throw things off), the pattern would continue to work that way. But since they aren’t, I am instead due to provide the final update for March.

I have, for this final week of the month, created the second profile settings review for Ring Fit Adventure… the one that I had forgotten about the first time around until after I’d finished the recording and editing session.

An easy enough fix, though it created an unplanned delay in experimenting with my randomized spreadsheet.

Like I mentioned in the previous post, I chose to upload this one solely as a split-screen version; there is simply not enough moving on my part to warrant rendering a 360 degree version, and the only reason I even show myself in the video is to maintain some consistency in my editing style for the series.

The next “profile settings” video, which I will not–can not–produce until I’ve progressed far enough in the game to unlock whatever I have left to showcase, should likewise be split-screen-only, but in the meantime I can go back to experimenting with recording options for my other games. And once I start adding VR games to the mix, experimenting will definitely be a requirement.

And we finish the update with my week 13 progress in Zombies, Run. 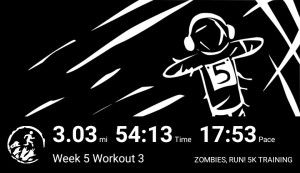 My pace managed to pick up again from what it’s been the last couple of weeks, but I have a feeling I’m starting to level out at this point; with as little time as I have left until the end of the story from the 5K app, I probably won’t see another significant improvement until I start back in to the main app… and maybe then I can blame my current pace on the fact that my legs want to fall off after walking for so long!

Still haven’t started on those homefront missions for non-walking days. Not on work days, and not on “not going for a walk outside because of nasty weather” days, either. Shame on me.

I did finally make a decision regarding headphone/sunglasses combos, however. Around the same time as I received the third stimulus check, I learned that Bose finally made a model with a higher IP rating! Or at least, higher water protection. Still not thrilled at the lack of dust protection (or the testing thereof)–even if I didn’t live and walk right next to a dirt road, trail running is a thing, as they well know since they include it in their marketing for different colored replacement lenses–but I decided to take the chance and bought a pair.
And then, once they were paired to my phone and I could start exploring the app, I realized that I had been looking forward to experimenting with the “added bonus” of the Bose AR mode more than I’d originally thought… as the discovery that Bose had discontinued this feature was reason enough to return the product for a refund. That part was handled easily enough, but this realization sadly occurred too late to cancel my order for an off-brand set of replacement lenses; rather than mess with shipping the lenses back to the secondary seller based out of who-knows-what-country, I’ve got them listed on eBay in the hopes that I’ll have a better chance recouping my losses there. My option, therefore, is to instead use the Aftershokz brand Optishokz, at least once I remember to charge them up for the first use in well over a year.