Posted on 19 July 2021 by Side Quest Publications

Ah, once more the annoyance of having multiple medical appointments in the same week. I mean, it’s only two appointments, one of which is fairly routine at this point, and I know there are people out there who have worse than that, but with only two days off from work in the first place and a fair bit of commuting to get to the appointments that still means less “me” time.

Thankfully the dental crown has already been paid for (back when I got the temporary three weeks prior) or I’m sure I would’ve choked on the cost again. As it is I’m choking on the credit card statement… really got to watch the non-essential spending or I’ll never build up my bank account enough to be worth switching reward systems. (Kasasa if anyone’s curious about that reward. I’m sure I’ve mentioned elsewhere, but my bank currently has me set up with the “Tunes” account which only rewards me for making so many qualifying transactions on Amazon, Google Play, or iTunes, and it’s a finite $10-per-month reward; my goal is to switch to an interest-bearing account so that all of my monthly subscriptions e.g. Netflix will qualify, but I’d need at least $4000 in checking to make it earn more than the Tunes account. And, well…. given that my savings is the only one earning interest without making that switch, I need to keep that built up for the purpose of bill-paying before I try to drop that much into checking.)

Anyway, to make a long story short, due to a combination of lack of time and pure procrastination, I slacked off on doing recordable workouts again. I did, speaking of non-essential spending, manage to get my hands on the new LoZ-themed JoyCons (I discovered purely by chance, and not at all by keeping an eye out for them like I should have been doing, that the store I work at had them in stock so I bought a set on my lunch break), though since my work shifts are as late as they are and the Joy Cons needed to be charged and paired to the Switch before I could use them, I have not yet tried them with the Ring Con in conjunction with any of my Homefront-esque workouts in Zombies Run. But now I have enough controllers to play three-player games with plenty of room to choose a preferred controller style (three sets of Joy Cons, two pro controllers, and a “comfort grip”)… assuming I can convince my parents to join me in any of the few multiplayer games I own. 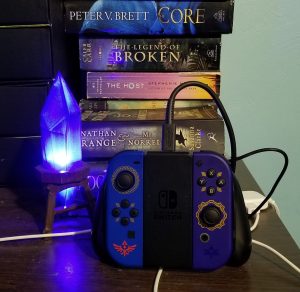 Disclaimer here: The link to the Joy Cons is included above for the sake of “hey I’d like a commission please” but be warned… the scalpers wasted no time buying out stock and relisting them at ungodly high prices, so you might be able to get a reasonably-priced set through my link or you might be waiting a while or buying elsewhere. I wish you the best of luck.

I also acquired a new Wii Remote with Motion Plus built in… though I consider this one vaguely essential as there are some games that I simply won’t be able to play without it; the dance workouts in Wii Fit, for instance, require two such Wiimotes. The not-so-essential part of this is that I chose to buy the Yoshi-themed one (from Mario for those like me who aren’t all that familiar with the characters from Nintendo’s pet series–I literally bought Mario Kart so I could play as Link on a motorcycle, not because it was a Mario game) despite the higher cost than a standard color, because I couldn’t a “standard” green one… I wanted to try to match my green-and-white Fit Meter (the other Fit Meter model is black, as is my older Motion Plus Wiimote).

Got a few more Zombies Run workouts in, though as predicted dilly-dallying on social media led to missing a few days and delaying the completion of any stories.

The main mission is fine as far as distractions go–as long as I don’t sit online so long that the sun is near to setting before I go out (and as long as my phone has a decent battery when I do go out), I can get my normal two walks in per week.

It’s the stuff I do when I get home from work that suffers delays… like how I easily had enough time to finish the Atlantis mission and make a single attempt at seeing how well I could manage the must-look-at-my-phone-to-collect-everything app that is The Walk while moving around in the confines of my bedroom… and instead I finished out the week with one more episode of the Atlantis mission to go. 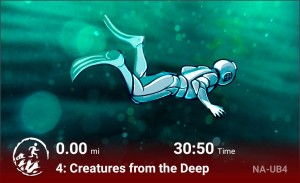 Since I’ve only seen two missions thus far in New Adventures that include Homefront-esque missions, and Atlantis is only of the Homefront type whereas the space mission Negative Space alternates between “running” and Homefront workouts, the plan is to start the space mission instead of returning to the app’s main storyline on my next day off, do the final Atlantis episode and the next space episode on my next workdays (I must get the space episode done one of these two days, otherwise the way the workout types alternate means it’ll take me almost another week to complete), which leaves me the next day off to do the third space episode outside, the next workday to do another space episode, and then…. Well, the final two days of the week (both workdays) depend on whether I’ve stuck to the plan or delayed enough to push Atlantis out a bit further, but that will be when I should try The Walk as my after-work workout.