Posted on 1 February 2021 by Side Quest Publications

And one of these days I’ll quit using corny titles for these posts. 😉 Not because I’ll choose to knock it off, but because I won’t be able to come up with one that I like.

Anywho, another week of no new footage. Technically speaking.

This time around, my nephew came over to stay a few nights, and since the spare bedroom was converted to a storage room several months ago, my folks put up a queen-sized airbed for him in the living room, right smack in front of the gaming system. So I had no floor space to speak of without deflating that mattress on a daily basis, and since it takes forever to inflate and doesn’t hold air properly in the first place and… you get the idea. I didn’t use the area so I didn’t play any of those games.

On the plus side, that gave me time for a few other things. For instance, I started work on tweaking my “outdoor workout” playlist–the current list as recognized by the Zombies Run app is full of everything I got from the soundtracks for my assorted indie games, set to shuffle, so naturally I’ll randomly come across a few that just don’t work for me. Case in point, one track that was nothing but talking–not singing, not chanting, talking; a rather unusual track to hear in the middle of what amounts to an audiobook, and I suspect that one was the “narration” track for Dust that is included with the game download rather than something included with any of the official soundtracks.

On a more critical note, it also gave me more time to test an issue I discovered with my available footage. If you saw the note I added to the previous post, or saw the video in question, you’ll notice that the video I recorded and rendered as 360… didn’t show up on YouTube as 360. I was not, at the time, sure why it didn’t show as 360, and to be honest I still don’t know: upon reinstalling all of the relevant software it showed on GoPro’s own “VR” viewer as 360, so I didn’t accidentally upload the wrong video, and two other videos (one on my motorcycle channel and the test video linked below from the gaming channel) both present as 360 without the need to “inject” the file that YouTube offers for the purpose.

Best I can figure is that it just glitched out somewhere along the way.

In that case, this post provides two moments of footage for comparison: the original Hero 5 footage as linked in the previous post and the test footage from the Fusion 360.

Or you can visit the Fitness Games playlist on my channel to keep an eye out for any (fingers crossed) new videos.

As mentioned in the previous post, I’ll need to do something about the ambient lighting and/or editing on the computer’s side of things to make the footage less grainy, not to mention find a better mount for the camera… or just switch to using only the 360 Fusion. I haven’t decided yet but I’m leaning heavily towards the “use only one camera” option.

This one is nothing more than a smaller clip of the footage I’d recorded the first time (thank goodness I still had the original files, usually I delete them to clear up space right after I’m finished editing and rendering… or think I’m finished in this case). At this point I think the plan is to use Wii Fit’s body test mode as another “before and after” thing, done once a month to show if I’ve made any progress and by how much, rather than the weekly thing that I keep not doing with my other workout options.

I might choose to move the camera to the other side of the TV so the lamp doesn’t shine right at it, but the current position was based on finding a spot where it would consistently be out of the way while I exercise. Barring that, there is still the option of skipping the “360 degrees” idea and just editing both sides of the camera into a single still image via the likes of OBS as my only upload options; that would make it easier to grab a frame for a thumbnail, at any rate. I’ll still have to see how that works with my currently available footage before I make any decisions.

And finally, there is the Zombies Run! progress. 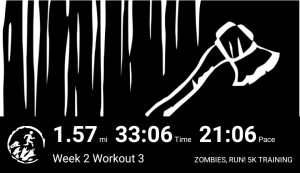 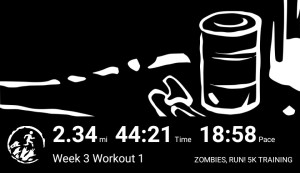 Monday’s mission was par for the course from previous weeks, which I must confess I found a little surprising: I had two separate delays in the form of A) still being in the house while the intro was playing (I don’t actually know if the app includes that time in my stats but I usually start playing the mission as soon as I’m out the door and ready to start walking), and B) not realizing until I was down to one end of the street that I’d forgotten my reflective vest and having to slow down a little for the purpose of heading inside and putting it on.

But Wednesday’s workout was especially surprising. This one starts the “week 3” round of training, with a considerably longer session once I was done than anything that I’ve done before… and not only did my energy not flag enough to slow down my average pace, I actually went faster than any of my previous sessions. Of course I paid for that the next day, when it took a couple of hours into my shift at work before my sciatica flair-up died down; given that I work a retail position that has me on my feet all day, I doubt that the “walking for 40 plus minutes” is to blame, but a combination of the pace and the way the weather affects the terrain and even how the ice kept trying to convince me to do the splits are all likely major contributors.

(And can I say that sciatica just doesn’t make sense? You wake up in the morning with back pain, that’s your body telling you “I’ve been injured, I need to protect myself,” so you don’t want to move… but moving is exactly what you need to do to help it go away! It’s a complete contradiction of the function pain serves.)