Posted on 27 January 2021 by Side Quest Publications

No distractions this time around, at least none that are not already part of my routine (e.g. running errands). Instead I had the fun job of dealing with computer problems.

First there is the matter of time to edit and render. Past experience led me to expect this to take a while, but when it takes four hours to render 10 minutes worth of footage (well, 40 minutes worth of footage considering I recorded with two different cameras at what should be 4k quality and got three different angles to choose from out of the 360 degree Fusion model), that means I’m not going to do much recording in only two days off from work. At least not until I’ve cut down on that backlog of other things.

Speaking of which, I’ve uploaded the footage from the Hero 5 to YouTube. That video, merely showing my “first” body test in Wii Fit U, can be found below

or you can check out the Fitness Games playlist directly on my channel.

At the time of this writing this is the only video on that playlist, though the 360 degree version of the same workout is uploading right now and should be visible down below once YouTube has finished processing it

(And speaking of technical trouble, the YouTube version isn’t showing in 360 on my end. I’m trying to determine if A) I accidentally uploaded the wrong file, B) I need to do a bit extra like use the YouTube injector to get it in 360–you wouldn’t think that’d be necessary when the Fusion’s proprietary editor makes it 360 for me, but I digress–or C) I’m still experiencing problems due to whatever glitch led me to factory resetting my computer before I could upload this. Unfortunately the need to reinstall various programs means it might be a while before I’ve finished testing things; I might just be running things through OBS and doing a regular 2D split screen from now on and skipping the 360 degree idea.)

I have to say, given the difference in lighting (not to mention options for recording angles) I’m strongly tempted to quit using the Hero 5 for the purpose and just stick with the Fusion… at least until I can justify the cost of the Max, which might be a titch easier to use by virtue of having an actual preview screen.

Also in progress are the two other copies I got from the Fusion–one video showing the footage from the front of the camera and one from the back. The plan is to combine those into a single video, probably top-and-bottom (technically I’d rather have side-to-side but the dimensions won’t work for that), and probably using software like OBS to put do so. I don’t know if they’ll still be 4K when I’m done because I’ve only used OBS once before. I have not at this time of writing started work on them because of the next technical problem:

And here we have the bigger problem. See, some time during the week I’d noticed that my computer was experiencing… issues. Issues like the start menu not working, which later led to my discovery that the search bar and activity log weren’t working either. Nor the Microsoft store, nor settings, nor update history.

On Tuesday I tried looking online for a solution (Chrome still worked just fine, thank goodness) and most of the solutions offered said to begin by running a computer scan, using the command prompt with administrator privileges.

Unfortunately, Command prompt with administrator privileges just gave me an error message about some dll not working. (In hindsight, I only know this happened specifically when I tried to open it by right-clicking the start menu, and opening the command prompt from the same location without such privileges gave me the same error. I was able to run it without those privileges if I opened it via the run command or manually locating the executable, but it had not at the time occurred to me to try the same to run it as an admin.)

Back to Google, and solutions for the error message required that I first pay a visit to settings… which was one of the apps that wasn’t working.

Figuring that rolling back to an earlier restore point or, god forbid, a factory reset was in order, I manually backed up my entire user folder (my external hard drive is already set to back things up daily but I didn’t intend to risk that anything was missing) and went to bed, hoping it’d be done copying files by the time I was ready to start my day the next morning.

On Wednesday I finally managed to access my available restore points, and discovering that three of the restore points were all within the three-day period in which I’d noticed the issue and not remembering on exactly which day I’d actually first seen it, I decided to roll back to the somewhat earlier point of Jan 6.

No dice. The computer appeared to successfully roll back to an earlier point but the problems still existed. I decided it was time for the option of last resort, and after the third (third!) attempt at a factory reset the computer was finally back in working order. (The first one only got so far before it gave me the message of “undoing changes,” and the second got stuck in a reboot loop; both went through the built-in recovery system while booting directly from a recovery drive via USB is what finally got things working.)

During that time I was able to use my parents’ computer as a backup option, partly to complete the daily checkins on my video games (ESO being the only one I could not access from my phone) and partly to upload that first video to the playlist, but I did not begin to install any critical programs such as the proprietary GoPro apps or a video editor until I was able to do so from my own computer.

I’m really trying to avoid spending big bucks right now, but I’m thinking that once I find out how much I get as a tax refund it might be worth buying a “cheap” gaming laptop just so I have a better backup option. Not that there’s any guarantee a backup won’t experience the same problems the main had, of course.

It’s not all bad, though. In addition to the one video posted to YouTube, I was still able to get in two more sessions with Zombies, Run. 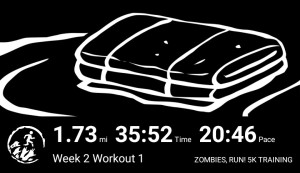 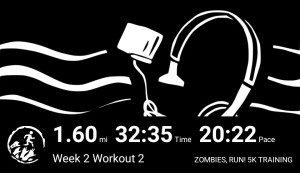 No icy attempts at doing the splits this time around! My pace seems somewhat on par with the more ideal conditions of the previous weeks with a slight increase in average speed, though it’s hard to tell how much the slight decrease in distance and how long my energy flagged accordingly factors in to this difference.

This entry was posted in Computers, Fitness, Gaming and tagged exertainment, fitness games, Self Care Chronicles, YouTube. Bookmark the permalink.