Posted on 12 January 2019 by Side Quest Publications 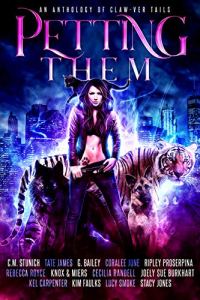 Petting Them: An Anthology of Claw-Ver Tails can be found on Amazon as a Kindle Unlimited title
(Amazon affiliate link included)

Before I begin my review, let me point out that I will not review books on my site if I did not enjoy them myself (or unless I got a free review copy, which this is not). Especially since I’m an Amazon Affiliate; I’m not going to spend time encouraging someone to buy something I didn’t think was worth buying, and I’m not going provide an affiliate link to a product while blatantly telling people not to buy it. I’ll reserve those “don’t buy it” reviews for actual review sites like Goodreads and Amazon itself.
That being said, I must confess that I am not into the “reverse harem” genre… or, indeed, any harem. I’m simply not keen on stories that focus on the sexual, on men and women whose first impressions depend on being “yummy,” and similar tropes.
Naturally, this means I am biased, and the result of this bias is that most of the stories within this anthology were somewhat forgettable. Forgettable to me, that is.

Why did I download this one, then? For a couple of reasons.
One is the magical/paranormal element involving the animals themselves. I’m nearly always up for a good “magic animal” story. And the second is that this is a charity anthology, the sales of which benefit Pacific North Pets.
And the third, of course, is that this is a Kindle Unlimited book. Since I am currently on KU for a three-month trial, the only thing it cost me to give this anthology a try was space in my library for a different title (so here’s hoping my download counts towards that charity 😉 )

And since I downloaded it via KU rather than as a truly free read, it would only be fair for me to attempt to give each story a read-through.
Like I said, my bias means that a good chunk of the stories found within were somewhat forgettable. I recall the basic plots but nothing suitable for reviewing purposes. But a few of the stories stuck out in my mind for assorted reasons.

First on the list is Ten Cats Paranormal Society by CM Stunich.
This one had a bit of crushing, hints (and sometimes more than hints) at a love triangle, and a classic case of a jerk with a heart of gold.
It also had an intriguing plot that ended on a cliffhanger.
The summary, or prologue, includes this little tidbit:

The King of Ghosts and Demons has cursed us, but also he wants me as his bride.
Oh, and I’m pretty sure there’s something fishy going on with that six-toed cat.
We trick people into believing our lies.
Now, our lies are nightmares turned reality.
If we can’t work our biggest con yet, we’re all screwed six feet under.
I never should’ve opened that damn box.

But the story doesn’t show the characters trying to work their biggest con. Rather, that part of the summary describes the end of the story.
I want to find out how the characters cope with learning that ghosts and demons are real, how they attempt to get out of the curse (successfully or not)…. and why exactly someone who pretends to hunt ghosts for a living deserves to be cursed by the King of Ghosts but someone whose idea of a fancy invitation is to glue a live butterfly to the envelope doesn’t? I can only hope that the cliffhanger is to create interest for an eventual novel or series and that the author will continue this particular storyline soon.

Next one that stayed with me is The Missing Wolf by G Bailey.
Like Ten Cats, this one ends on something of a cliffhanger. Unlike Ten Cats, Missing Wolf states right out at the end that there is a series in the works.
And unlike many other stories in this anthology, the sexual element was largely… absent. There was of course the obligatory mention of how hot the characters are, and one of the men accused the others of only being interested in sex with the new girl, but nobody ever acted on it. Whether that will continue to be the case in future stories remains to be seen.
For my part, I look forward to learning more about the Ancient familiars and how they compare to all of the other kinds, about the political and legal complications involved in the Familiar Empire and the characters’ struggle to survive in a world that fears their very existence. (I could not help but notice that the only person Anastasia’s wolf did not threaten at the beginning was also the only person who did not automatically assume that Anastasia herself was a threat for simply existing; there may be some merit to their fear, but it already sounds like so much of the anti-familiar campaign is a load of bigotry.)
I am also curious about the issue with Anastasia bonding to the wolf Shadow when her cabin mates insist that Shadow was supposed to arrive with someone named “Dawn.” I admit I looked up the name “Anastasia” at that point to see if the author might have tried for a symbolic name, but I found no evidence of such.

And the final story that caught my eye is Bethie’s Heaven by Cecilia Randall.
This one, I must confess, stayed with me for a completely different reason.
Yes, I am interested in finding out what becomes of Annabeth’s animal shelter and wildlife refuge. Yes, I am curious if anything will come of the lie she told to get rid of the guys’ ex-girlfriend (and whether she really will get to know Misty well enough to become friends). Yes, I love the idea of the soul leashes (and the dogs’ sensitivity due to their breed.)
And yes, I definitely felt the characters’ outrage when Annabeth got that letter from her mother (I don’t care that you’re mourning a lost son, who the hell refers to her own daughter’s inability to have kids as something the daughter “lacks”…. and in the context of sending out a baby shower invitation for the daughter’s ex, at that?).
But the story was marred by two points, both surrounding the characterization of Jake as an asshole. He did act like an asshole at times… after he was introduced. After Annabeth had already decided that he was an asshole. After other characters took her reaction as given and completely normal. After his brother Carter (who admits to being an asshole at times) had an “aha” moment on realizing that the reason she reacted badly on seeing him was because she’s already met Jake. But before all that…? Jake being an asshole was purely an informed trait; I must’ve read his introductory chapter half a dozen times and I could not find one single thing that would mark him as such except the author’s decision to tell us, via Annabeth’s perspective, that that’s exactly what he was.
On the flipside, when he does start acting like an asshole, one of those moments comes and goes without anything more than maybe a startled confusion on Annabeth’s part. (Confusion because she doesn’t realize she’s being propositioned to share herself with all three brothers.) I am talking, of course, about his reaction to learning that Annabeth can’t have kids. He is grateful that kids aren’t an issue… but she never said she couldn’t get pregnant, and wouldn’t miscarriages make things worse?

Biases being what they are, this might not have been the most useful review out there, but I am practicing.

And with that, on to the next book in my KU library!