Posted on 15 November 2021 by Side Quest Publications

Let’s start this off as usual with those before-and-after photos:

Had a few snafus with this one. First, it took about a week before I remembered to take the month’s round of photos, and another week before remembering to take them translated to actually taking them. Then, I’m not sure if the remote I’ve got is just poor quality or if the battery’s actually dying, but I had to keep clicking the button, and clicking it, and clicking some more before it finally took the photos. Like it’s not connecting to the phone every time (reason for my hand placement in the back view–I was thinking using it in a more natural pose had my body blocking whatever signal it sends just enough to interfere).

I had similar issues with the remote last month, and I’m hoping it’s just the battery… but to add to that, I’m hoping it’s because the battery was already bad when I bought the remote, because using a common CR2032 a few times a month (the same kind I use pretty much every day vis a vis my Nintendo Fit Meter) and having it die less than a year out seems excessively fast for the type.

Really starting to slack on the “update my blog every week” side of this project, and not purely due to a lack of recorded footage. For instance, I had my November monthly test uploaded to YouTube for a full week and only just now took it out of draft mode (as compared to Ring Fit that I recorded the same day as the test but took that full week to get around to rendering).

You know what? I’m going to blame this one on my parents. 😉 Nope, not the typical parental interruptions to do chores and the like, this is from them starting to take an interest in their own YouTube channel (and the brand new GoPros they got via early Black Friday sales) and “needing” me for all of the technical stuff (as well as the “just plain reading instructions but I’ve reached that age where I magically stop understanding technology” variety of mental block). You know, the type of interruption where you practically have to start your thought process over from the beginning every time you’re forced to think about something else.

But despite that I do have a couple of videos to share.

And the next level/world of Ring Fit Adventure! Which I managed to record in the actual gaming area courtesy of the guest finally having a regular job with at least one workday that overlaps with my time off.

While I don’t know how long the guest situation is going to continue, I’m honestly thinking about getting a cheap-ish capture card at some point to play these games more often in my own room (which will obviously require finding out what software I’d need to make it play), partly for the guest/space limitations but also because I want to include a real-time heart rate display (I have Cardia installed) to the gameplay footage and I don’t believe there’s any other way to do it without multiple displays.

From what I’m reading, though, this plan will probably take a while to implement… while my 360 works well enough, it’s obviously limited to “point the camera at a screen” mode for the purpose and I would like to upgrade my Hero 5 to a Hero 9 or 10 (both of which have a webcam mode). Also, regarding the above parenthetical point about software, it looks like I’d need something like OBS to actually use any gameplay footage from a capture card in real-time, and as highly recommended as that program comes my outdated machine lags considerably when running it, meaning I probably wouldn’t try such a project until I can justify the cost of a new computer, either.

Next we have Zombies Run, wherein the four days I had off from work since the last update translated to finishing… half of Season 1’s final 20K episode. 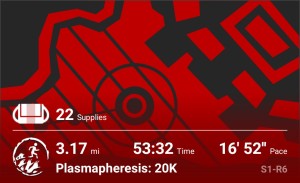 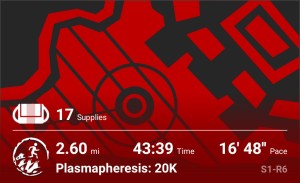 I only did it once per week instead of my preferred twice. Once I skipped due, if I remember right, to how dark it was outside by the time we finished family dinner (ah, daylight savings time and late-year sunsets, how my evening walks loathe thee), and the other skip was because it was supposed to be storming most of the day (I spent most of that day playing Synth Riders and Beat Saber due to the “I don’t need to plug anything in” safety aspect) though in hindsight the weather had been decent enough that I could have gone out if I’d decided to chance it.

Yeah, I don’t think I’m going to finish the season before the end of November. And that’s without factoring in the upcoming “lost episodes.” Even if the weather cooperates I just don’t have the stamina (yet) to speed it up, not to mention the sunset limiting when I’m willing to go out, but I will certainly try to finish before the year is done.

And speaking of playing VR versus Zombies Run, I’ve slacked off again on the Homefront workouts once I finished the German segment–I suspect the problem this time, besides being distracted by the shiny, is that there’s no actual correlation between my activity and what the app reports due to the nature of the workouts so no sense of achievement coming from that direction (while I don’t care about leaderboards and such, I can at least look at my time for an outdoor walk and tell that my speed has improved), and the fact that I’m repeating the story which is good but not really “revisit old favorites” good.

So while I got distracted by the shiny a few more times over the past couple of weeks, for the last three days during which I’d normally try to use Homefront after work I instead made further attempts to improve at the “for my use only” song selections on Synth and Beat Saber alike. The result is that I’ve played Uprising by Muse about half a dozen times, I’m still missing a few blocks every time when playing Counting Stars, Greatest Showman, or High Hopes on Normal at the highest speed, and after a couple of fumbles between each of the other songs I finished my workout on Sunday (to the tune of about 300 or so calories according to FitBit) by getting an SS Full Combo on new addition Party Rock on Easy Mode… meaning the next time I try that one it will be with speed modifiers.

And of course, the final update for the month, the numbers on the scale: 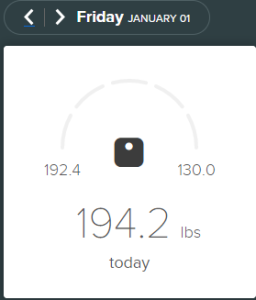 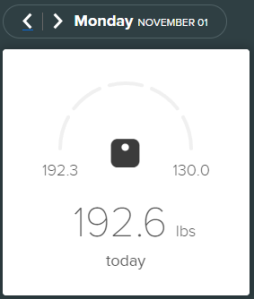