Workout Week 41: Other Kinds of Self Care

Posted on 18 October 2021 by Side Quest Publications

Not much recordable footage this time around, yet again due to a combination of things like weather and someone occupying my gaming space in place of an actual guest room.

Let’s focus on the weather as it pertains to the “other self care” element of this post.

One of the weirdly nice things of not spending time recording videos is that I can still, barring yet more procrastination, convince myself to use that time to tackle other tasks in the backlog, up to and including all of those videos still in need of editing for my motorcycle channel and my hodgepodge of a main.

Normally I try to spend an hour or two a day reading–not so much as a “time” based goal but a “finish a chapter/x number of pages but I don’t read as fast as I used to” based goal. And, at least until I start into the really long books on my to-read pile, that means I’ve been finishing a book a week on average.

But Monday I spent enough time reading (with occasional breaks to rest my eyes) that I went from being maybe a third of the way done of a 400 page book to a little over two thirds (my page count goal would estimate that to be three days’ worth of reading). A couple of days later I finished that particular book, added it to the to-donate pile (given the size of both my physical and digital to-read pile, I’m still debating on whether I want to continue the series enough to buy it on Kindle), and once I grabbed the next book and reshuffled my remaining options I realized a very important detail:

All of my to-read books now fit on my desk! And as long as I don’t acquire books faster than I read them (goodreads giveaways, bargain bin, thrift store), I’ll be able to continue shrinking that selection as I read and redonate so that they continue taking up less space as time goes on.

Granted, that isn’t actually all of my print books in general. There are still the books I had signed in person (which I’m obviously keeping), the ones I got signed via buying straight from the author in some fashion to “help the author out” (which I’ll probably keep unless I get desperate for more space), and the signed copies I got by chance from things like Goodreads giveaways (which I’ll add to the to-read pile once the unsigned books are gone, on the grounds that there’s no emotional attachment to having them as signed copies and it’s the easiest way to find out if I’d like them enough to keep them in some form). But it is the remainder of the unsigned books, the ones that have no reason whatsoever for me to feel attached to keeping them in their current form outside of the sunk cost of “I bought it, I should read it.”

(On a slightly lesser note, I’ve also finished getting rid of the books already labeled to donate in the form of Bookcrossing and outdoor libraries. Now it’s time to print off another list of labels for another round of once-a-week dropoffs. I probably won’t do that with the signed copies, though; not that I expect them to be in a “collectible” condition once I’m done reading them, but I think I’d prefer to limit the damage to anyone who might want to collect them by at least not sticking adhesive labels inside of them.)

And once the books are finally emptied off of the desk, I can seriously consider getting rid of it and pushing my bed into that space (barring being able to justify the cost of a Murphy by that point) in order to get that little bit more floorspace for VR and simply being able to navigate my bedroom in general. (Part of the plan is to take the shelf unit that’s shoved into my closet and put it against the wall where the head of my bed currently sits; I can take the VR accessories currently attached to my desk and hang them up over there when that’s done.)

There’s just… one small problem with that plan. I was able to relocate most of my computer hardware to my main desk without space being an issue (I’d decided not to wait until I could replace it all with a laptop, though such a replacement is still planned), but that graphics amplifier is huge. I tried sticking that on the main desk, but unless I can figure out a way to get it into place without hiding it behind the monitor (which might require a tall-enough monitor stand if one exists), I simply won’t be able to keep it there without taking up about half of the desk’s available depth. And since I’ve only been using it as a glorified USB hub (figured at the time I bought it I’d buy a new graphics card somewhere down the line, but between the AGA’s requirements and scalpers making it hard to afford the right card, it’s almost easier to just buy a new computer at this point), I thought I might just replace it with one and take up less space… but first I’ve got to figure out how to revert the software to stop requiring it to be connected.

Now onto the gaming aspect.

On Thursday, I finally, finally got around to trying out my Cybershoes for a gaming video… only to discover that they’re not (yet) compatible with the game I’d selected, Doctor Who: The Edge of Time.

So *shrug* power off the shoes and I’d play the game normally, and I’d just count it among my multitude of general games rather than something that I could shoehorn into the fitness category. (And add “moving enough in the real world to count a VR game as fitness” to my oddly-specific list of reasons to save up for my own apartment 😉 )

First is simply the equipment limitations. The lack of Cybershoes for one, the fact that Quest doesn’t transmit sound to PC when casting via Oculus’s own browser-based system for another, and finally where that second element forces me to depend on my webcam to pick up the game’s sound not working so well when my computer’s fan is running so loud.

Second “hazard” I noticed, which would certainly be a common problem out in the real world, and as such, for a wide variety of niches and genres on Youtube, but I expect is unique to VR when it comes to gaming videos, is that I’m short. Not really short, just a few inches below average from what I’ve read, but short enough to make certain things unexpectedly difficult since I had this session set to standing mode. (My position with regards to the webcam may make it hard to tell, but if you look closely you should be able to see me reaching way over my head to grab the lever for that fuse box. I’m mostly sure it was almost in my face the handful of times I’d sampled the game with “seated mode” turned on but I don’t remember for certain.)

And the final occupational hazard, the one that prompted me to upload this particular video, is the interruptions from people who know I’m recording something, know I’m trying to make some money at this (dare to dream), and therefore know that it’s rude to interrupt outside of an emergency until I tell them I’m done recording… but interrupt for non-emergencies anyway.

Oh, I also used VSDC (the same one I’d been using for split-screens) to edit this time around rather than the much-outdated Windows Movie Maker.

A bit of a learning curve (which is normal), and my own computer’s resolution means I won’t be getting 4K quality out of the deal for screengrabs, but I’m liking it enough that I’m seriously debating on buying the pro model for additional features… such as its ability to make similar edits to 360 degree videos.

And with Zombies Run 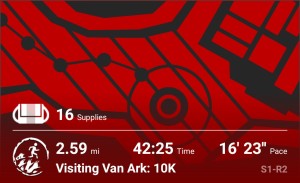 As per the above mention of the weather, I didn’t get out for a walk on Monday, but I did finally finish that 10K episode on Thursday.

Next in the story appears to be a pair of 20Ks. Yay.