Workout Week 35: Not a Monthly Update

Posted on 6 September 2021 by Side Quest Publications

Well, I got some workout games in on Monday as originally planned… but spent a good chunk of Thursday (my first day off of the month, so the day I should have recorded my monthly update) driving a roughly 100 mile round trip courtesy of my parents needing to get regular maintenance done on their motorcycles.

Found a bike I really like while I was there but I’m not quite ready to take on yet another loan…. Unless I win the lottery, I figure by the time I’m willing that thing will be an old model (it’s from this year) so I can still keep an eye on new offerings as time goes on.

And by the time we all got home from that variety of “running errands,” it was time for a late lunch and rendering a very few videos before my parents decided that we should go out for dinner. (I really need to stop doing that; I like that there’s things we still enjoy doing together but I don’t like that it feels like I only have “me” time when they go off to do something without me. Not to mention the whole “saving money” part of the equation.)

I started to upload these videos en masse on Thursday night, but something else I was doing on my computer caused it to overload and crash (black screen with visible mouse, CTRL+ALT+DEL did nothing) so I had to forcibly shut it down and restart… which, of course, meant interrupting and starting anew anything that I hadn’t finished doing, like uploading every single video on this page.

In any case, my workout total was two sessions of Ring Fit Adventure (Adventure Mode and a random workout) and one very short session in Wii Fit.

And my first use of Color Coded attacks; now I just need to pay attention to find out whether I can choose which enemy I attack for the “gaming” aspect of this fitness game or if it’s kinda random (for those attacks that don’t hit everyone, of course). Because honestly? If I can’t choose my target I’d probably go back to letting the game pick my moves, at least until there’s only one enemy left to hit.

First time I tried this one, and I already got an S+ score. Unless I miss my guess about the scoring system, that means I have to play it on Advanced mode the next time my Randomizer selects it.

This’d be one of those rare times where I not only know where I went wrong, but surprisingly (for the context) it has nothing to do with my fitness level. (Or at least, it wasn’t only or even primarily due to my fitness level.) I just kept not leaning far enough to one side or the other get my Mii onto the footprints in time to hit the ball.

In other news, I came up with yet another way to reorganize my room for the sake of getting a little more VR floorspace:

Get rid of my L-shaped (no longer an actual L due to previous reorganizing) tiered desk and shove my bed into that corner!

Granted, there are two things that desperately need to happen before such a change is even possible: finish the mountain of a to-read pile so I don’t have books all over my desk (not even the signed copies I’d been thinking of lining up once the others are gone), and replace my desktop computer with a laptop so I don’t have hardware spread out among two desks. Not only that, but my reliance on hanging things from clips on my desk means I may not readily get rid of that desk even if and when the first two criteria are met (though I might be able to attach those clips instead to the shelf unit that’s currently shoved into my closet) and unless/until I replace my platform bed with a Murphy there’s still some doubt as to whether there will be a meaningful difference in floorspace… but it’s a goal to work towards all the same.

Given the episode length, I just barely had time to complete the New Canton 10K “race” titled Etymology after we got home from dinner on Thursday (after first doing a google search–that was too quick to get any real detail–about exercising right after dinner and getting a lot of results about what exercises to do to aid in digestion but a whole lot of nothing about timing), meaning I went roughly 5K per each of my days off from work.

The races, I’ve noticed, don’t give you the “halfway done” notifications that the normal episodes do–I even checked to make sure I hadn’t turned off that setting and forgotten I’d done so–so “5K each day” is only a guess, but it’s close enough to accurate for my purposes.

In hindsight, that means I really ought to have been able to do the previous 5K in one day; I’d finished the final 5K episode from the training app in one day, after all. But my parents have some odd objection to me going out early enough to finish before sundown (an objection given in the form of when they make dinner that I’m expected to join them at) at the exact same time that they object to me being out after sundown (even when “after sundown” can be translated as “the sun is just below the treeline when I walk in the door”). And I’d just as soon not have gone out earlier yet while the summer heat still reigned. 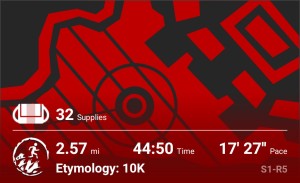 Story-wise, I should be going back to the regular missions for a little while before I move on to the Abel 5- and 10K races… and then at some point there are two 20K races to contend with, meaning a full month’s worth of sessions just for those two episodes.